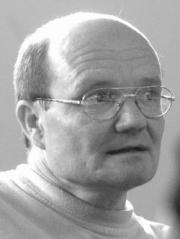 Born in 1954 in Prague, he studied theatre science and Czech language at the Philosophical Faculty of Charles’ University, and graduated in 1978.

Previous engagements and employment: The Cabinet for Czech Theatre Studies at the Czechoslovak Academy of Sciences ČSAV
Theatre Department
Labyrint

Since 1996, he has been the dramaturgist, and together with Jan Borna and Hana Burešová, the manager of the Divadlo v Dlouhé Theatre. Apart from many theatre adapatations, he has also participated in the scenarios for the performances Létavý lékař – The Flying Doctor, Kouzelný vrch – The Magic Mountain and Obrazy z Francouzské revoluce – Images of the French Revolution. As a theatre dramaturgist, he has been cooperating with his wife, Hana Burešová, for over twenty years and has prepared more than thirty performances with her. He is a graduate of theatre science and Czech language at the Philosophical Faculty of Charles’ University, where he gained his doctorate in philosophy in 1983. Since the year 1990, he has been an editor of the magazine Divadelní revue – Theatre Revue. He regularly cooperates with Brno City Theatre, together with Hana Burešová.