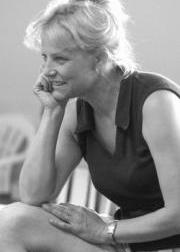 Born in 1959 in Prague, studied directing at the Academy of Performing Arts, DAMU, graduating in 1983.

A wide range of genres and a variety of styles are typical of Hana Burešová’s work. Her inventive theatrical productions show a great feeling for style, the ability to convey the contents of the play in an unmistakable form which strictly arises from the poetics of the piece. So far, she has created 40 theatre productions and 2 radio adaptations of theatre plays. Since 1996, she has been the art manager of Divadlo v Dlouhé Theatre, together with the dramaturgist Štěpán Otčenášek and the director Jan Borna. She has also guested in other theatres (the National Theatre, Divadlo Na zábradlí, Drama studio Ústí nad Labem, Viola, Brno City Theatre, Theatre M. Držiče Dubrovník, and she guests regularly at the Theatre Ungelt). She studied drama direction at the Prague Academy of Performing Arts, DAMU, and she produced her first performances at the Prague Club in Řeznická. From 1988-92 she was engaged at the Central Bohemian Theatre in Kladno - Mladá Boleslav; from 1992-95 she was at the Labyrint Theatre in Prague.