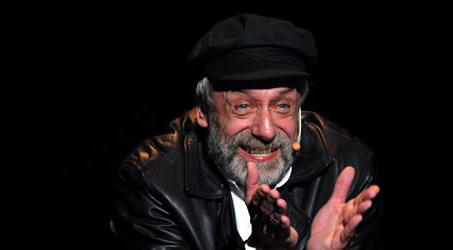 This work, also played under the title Anatevka all around the world, belongs to the most famous musicals of the world dramatic history. With its 3242 reruns it became the most frequently played performance and was granted a lot of awards. The story of the musical, which had its premiere in New York in the year 1964, is based on the stories written by the Jewish writer Sholom Aleichem about Tevye the milkman who tries to marry three of his five daughters. According to the tradition observed by all inhabitants of the small Russian village Anatevka parents with a matchmaker try to find suitors for her daughters. But the daughters violate the tradition and find themselves the men of their hearts. The story is situated in pre-revolutionary Russia at the beginning of the 20th century, which was the period of great anti-Semitic pogroms. As the whole region is to be cleared from the Jews, Tevye and his family must move out and go to meet their uncertain fates. The performance offering a lot of themes to consider, the strong story about a common man and the excellent music is still topical.

Fiddler on the Roof Came Back to Brno. And It Is Good.

The famous musical Fiddler on the Roof put on the stage of the Brno City Theatre in two premieres at the weekend has become in recently. The famous title came back to Brno after almost forty years, it is also produced in Zlín and in the Prague theatre Na Fidlovačce. The tragicomic story of Jewish milkman Tovje, his wife Golda and five daughters is a non-pathetic celebration of human solidarity. The witty libretto was written in the year 1964 and was based on Šolom Alejchem’s humorous stories. The Fiddler extended the Brno repertory of works of the golden musical era of 1960’s represented by such megahits as Hello, Dolly! or Funny Girl.

The world-famous musical is situated in the pre-revolutionary Russia at the beginning of the 20th century, the period of big anti-Jewish pogroms. German stage manager Pavel Fieber created a simple performance in Brno which cites exactly the atmosphere of the Jewish Ukrainian town Anatievka in the year 1905.

Fieber relied on the basic pillars of musical: skilled actors, music and singing, and also effective dancing numbers. He himself created a scene from three simple iron walls. A massive rusty plate moves frighteningly from the horizon towards the audience. Less and less place is left for actors to live and act on the stage, completely in accordance with the tragic end of the musical. Vladimír Kloubek’s choreography offers an exceptional experience. You have never seen such a dance!

German Fieber perhaps exaggerated just the use of Czech-Russian patois which is neither witty nor functional. But it is just a freckle on the beautiful strong form which is really worth seeing.

Recently, the musical Fiddler on the Roof is played a lot, but I would not expect it in the Brno City Theatre. Stanislav Moša and his dramatic advisors build on novelties, or unknown or seldom played musicals, they need not make up for attendance. But this is a classic and, moreover, German director Pavel Fieber did not colour it with colour pencils as customary, but measured somehow with geometric aids. By similar method he did not mature much in operetta in Brno, but he was successful in Cabaret, where he was rather interested in social than private consequences of the story.

Nothing remembers usual Chagall’s pictures, even the symbolic fiddler’s figure has almost disappeared, the attributes of Jewish folklore were preserved just to the most necessary extent. The director and scenographer in one person left just stools and tables on the stage and added necessary accessories. He closed tight the stage background with a tinny wall with a single narrow door representing the connection of Anatevka with the external world. In the key moments of the play the wall is shifted forward to displace the Jews and just a narrow strip of proscenium remains at the moment of their exodus.

When they decide to leave, the wall goes up, the Jews carrying their luggage start for the shining horizon, but their way is blocked with another wall. The figures turn back resignedly to the audience and yellow stars shine on their black coats. Impressive, but rather schematic and chest-nutty, although the German director’s endeavour to remember holocaust again and again is appreciable. As it must not be remembered until people are imprisoned and killed for their political, religious or any other opinion.

The Brno actors did not overplay under Fieber’s management as it was usual recently, but they created credible figures by adequate pure dramatic means, with whom you may be happy or sad, may laugh at them or feel sorry for them. Neither Ladislav Kolář (alternating with Zdeněk Junák) does not stress the Jewishness of milker Tevye. He is a man knocking about and trying to understand everything in his own way. Especially, parting with Hodel at an imaginary railway station is very impressive due to the simplicity of acting. Face to face such a musical, the strength of Moša’s ensemble is shown at the frontier between drama and musical. I think I have not seen so precisely sung, danced and played scene of Tevye’s daughters about bridegrooms so far, especially the three oldest daughters acted by Jana Musilová (Tzeitel), Ivana Vaňková (Hodel) and Mária Laľková (Chava) excelled. But they all should be named, including Pavel Šrut whose translation rich in language complied perfectly with this timely production. And Jiří Petrdlík and Karel Cón who studied and conducted the music well, by the way, a live, full and good orchestra is rare in present musical productions. And let me name Vladimír Kloubek for his original choreography.

The Brno City Theatre becomes more and more distinct Czech musical scene. It has already offered a great number of productions verified with hundreds of repeats, a lot of original musicals or translations of foreign ones.

At the beginning of May the musical Fiddler on the Roof written by American authors Joseph Stein-Sheldon Harnick and Jerry Bock was put on the Music Stage. The work has been played by leading theatres of world metropolises for forty years. In New York and London it had three and two thousand repeats, respectively, and statistically it belongs to the musicals played for the longest time in the whole dramatic history.

Fieber could develop the qualities of conductors Jiří Petrdlík and Karel Cón, costume designer Andrea Kučerová, choreographer Vladimír Kloubek and choir mistress Jana Hrušková. Besides directing the play, he made some adaptations and created an unconventional scene. By using David’s star at the end of the play he managed to futurize the action with the horrible holocaust...

The cast is the best choice. Ladislav Kolář acted milkman Tevye, Miroslava Kolářová was his wife Golda, their daughters were played by Jana Musilová, Ivana Vaňková, Mária Laľková, Terezie Jurečková and Vendula Otisková. Marriage broker Yente was acted by Květoslava Ondráková, tailor Motela by Petr Brychta, revolting student Perchik by Jan Jackuljak, butcher Wolf by Milan Horský, rabi by Miloš Kročil and others. All the actors played their parts with enthusiasm and, moreover, they really lived through the emotional moments. It was not just a theatre, but a real fight against injustice.

The authors of this substantially hard musical deserve congratulations and we can look forward to other similar deep experiences with them.

The musical written according to the stories by Sholom Aleichem still offers a number of current themes to the present producers. The impressive story of Jewish milkman Tevye and his numerous family in the pre-revolutionary Russia and at the beginning of anti-Semitic pogrom elaborates not only the theme of intolerance to minorities, but also the problem of irreconcilability of various religions. Stage-manager Pavel Fieber (guest) tries to show that fundamentalism leads to hatred and conflicts in every religion.

The difference between the Jewish and Christian communities is underlined by language – Russian inhabitants of the village Anatevka speak garbled Russian, while Yiddish expressions are included in the vocabulary of Tevye and his fellows. However, from the viewpoint of total effect, the director’s representation of the scene is more successful and dramatically impressive. It is finished with a rusty tinny wall on the horizon which moves forward in key moments of broken-out persecution and demonstrates literally how hatred limits the living space of the heroes. Fieber’s concept is civil and free of any abundant stage effects. If he wants to enliven the stage dramatically, he relies on the well-tried music of the orchestra conducted by Jiří Petrdlík and Karel Cón and on the original choreography by Vladimír Kloubek, who prepared a number of surprises to audiences. No need to reveal them, just to advise that the famous dance with bottles on hats is included in the male choir numbers.

Although the actors give a balanced collective performance, milkman Tevye’s figure is outstanding. Zdeněk Junák, alternating with Ladislav Kolář, represents the protagonist as the man of firm principles, engaged in a constant fighting between adherence to traditions on one side and the voice of his heart and sense on the other side. When his oldest daughter Tzeitel wants to marry a poor tailor instead of a rich butcher, he is still able to suppress his respect to the old traditions and his own self-conceit, but when his middle daughter Chava marries secretly a goy, he declares her dead with a stony expression on his face. Junák’s performance was reliable not only when interpreting the well-tried hits like the song If I were Rotschild, but also in small comic scenes, such as playing a fictive dream in front of her wife. Miroslava Kolářová acts Golda with inner tension like a haggard housewife, however understanding and kindness weak up in her in extreme moments. She gave a tragic dimension to her heroine without declining to nostalgia or pathos.

It is pleasant that the Fiddler on the Roof in the Brno City Theatre is not a polished show. The simple scene, severe costumes, saving acting – these are the means with which the simple story about simple people in the inhospitable world is growing paradoxically up to the dimension of impressive tragedy. This statement is so valuable as such approach to the musical is not very usual in these parts. 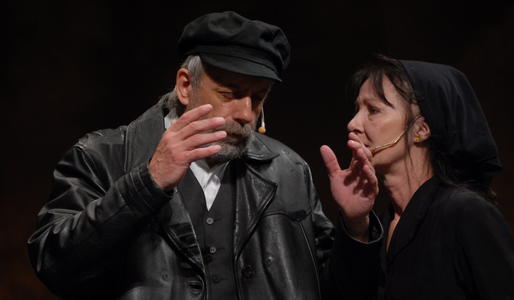 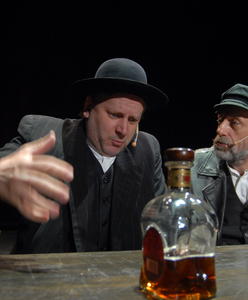 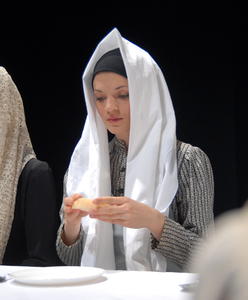 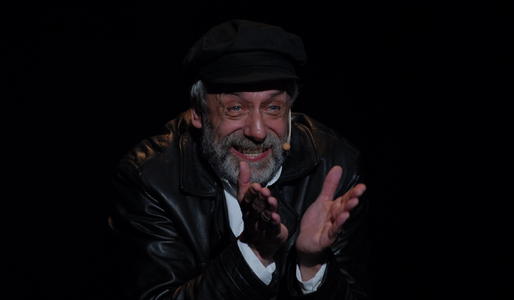 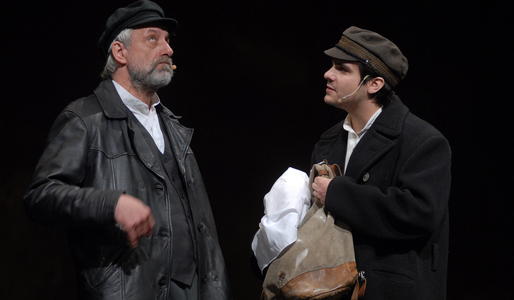 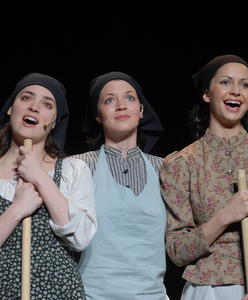 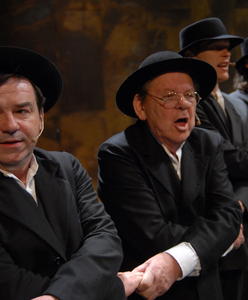 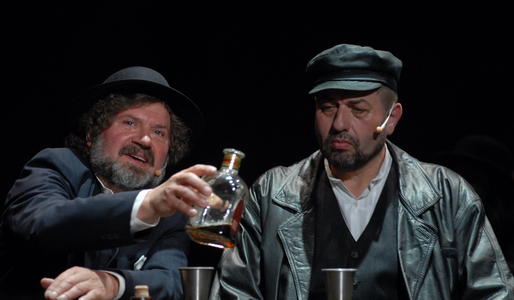 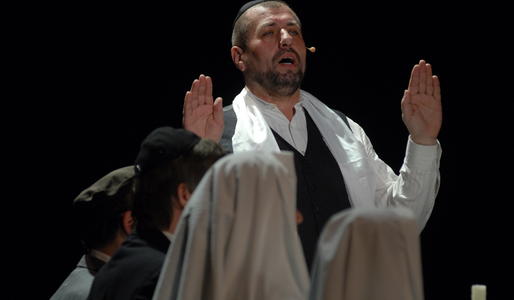 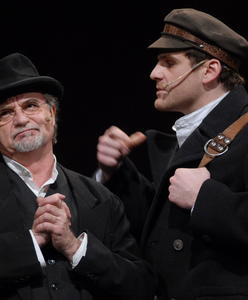 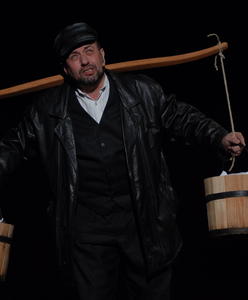 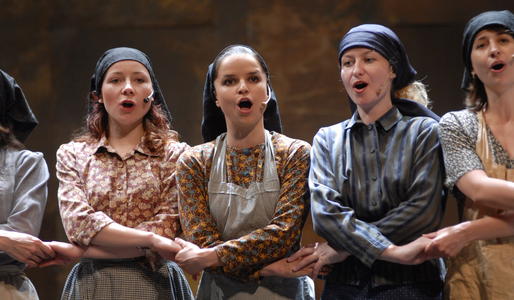