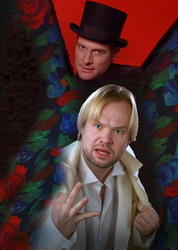 The premiere of the most famous classical operetta of all times composed by Johann Strauss Jr., Viennese “King of Waltz”, took place in the Viennese Theater an der Wien in the year 1874 and was so successful that Die Fledermaus soon appeared on the most significant world stages and has not disappeared since. The plot of the operetta, belonging to the limited number of operettas given also at renowned opera houses, takes us in its classical three-act scheme into the flat of Gabriel Eisenstein and his wife Rosalinda, to a ball in Prince Orlovski’s palace and then to a prison. The gem of the world operetta and the most significant representative of the Golden Age of Viennese Operetta, offers rare vocal and dramatic opportunities, well-constructed story and quality humour.

Surely nobody expected that the Brno operetta would become so successful not a year after its transfer under the Brno City Theatre. The current conception of The Bat differs diametrically from the last year’s tasteless operetta kitsch: its music and movement broke out the crust of old operetta feeling and gained a new appearance which may be alive for further dozens of years. Thus it seems that operetta is not just a connecting link between Mozart’s Singspiel and modern musical, but it forms an original and individual chapter in the development of music-dramatic forms.

The new translation itself by I. M. Milešovský, adapted by Petr Kracik and the director Pavel Fieber (guest) proves a more modern approach. This is also confirmed by adaptation of song texts by Miroslav Homolka. This trend is positive, though lovers of traditional versions could perceive it as an insensitive intervention in conventions – it is illogical to use dead versions of former Czech translators in the modern time.

Pavel Fieber is successful also because he knows the environment and possibilities of the Brno City Theatre very well (besides The Merry Widow he directed the successful musical Cabaret there). The stage designed by Christian Floeren highly contributed to the present acceptable production. The functional but not exaggerated use of the revolving stage helped considerably accelerate the course of events. However, I am not sure whether the viewers sitting in several front rows can watch the beginning of the action well as it mostly takes place in the upper part of the two-floor stage. The costumes by Andrea Kučerová also correspond to a more advanced concept: although they respect the period atmosphere, they are not archaic or little convincing. The traditional merit of the Brno City Theatre is its choreography – the actors conducted by Vladimír Kloubek do not just shift from one leg to the other in operetta manner, but they are unaffected and natural, they sometimes behave spontaneously in a stylishly felt musical manner.

The orchestra is conducted by Jiří Petrdlík; in comparison to the last year’s premiere of The Merry Widow, when the orchestra was predominantly dilatory, the orchestra’s sound improved significantly.

A significant progress can also be seen in choir parts – some action really takes place there, individual chorus-singers are not just stiff parts of static development, but they feel their message as actors. Music preparation brought the required fruit!

The majority of roles is alternated. The role of Gabriel von Eisenstein is played by Petr Gazdík and Bohdan Petrovič, pleasure-seeking Rosalinda is acted by Yvetta Tannenbergerová and Magda Vitková, the role of Frank, prison director, was studied by Andrej Beneš and Ladislav Mlejnek. Prince Alexej Orlofski is played alternately by Naďa Bláhová and Jana Botošová, bon vivan singer Alfred is played by Róbert Remeselník and Richard Samek. Notary Falke is acted by Igor Ondříček and Jakub Tolaš, dr. Blind, lawyer, by Miloslav Čížek and Radim Sasínek. From the smallest roles I cannot forget the part of warder played by Erik Pardus and Jan Mazák with a due portion of sound spontaneous dramatic art.

At the premiere, I was most impressed with the active approach to his role by Petr Gazdík. In comparison to the former representatives of the philanderer he does not feel him just as a stage depersonalized lecher of first class (which he does not cover), but rather as a “man from the crowd”. The more civil character can be received negatively by orthodox defenders of operetta cliché, but just such perception of operetta as the figuration of human characters in a timeless horizon is a phenomenon which should not be neglected at present. Gazdík’s role is not easy, but he plays it very well just as, for example, Yvetta Tannenbergerová. She can be regarded as a valuable successor of Milada Šubrtová or Pavla Břinková in the operetta sphere. Tannenbergerová’s excellent opera potential is transformed to operetta “sugar candy” as a matter-of-course. And as all good things come in threes, Jana Botošová in her “trouser role” of Orlofski attracted the audience with her perfect mimic pregnancy and impressive nonchalance. In smaller parts – as usually - Erik Pardus was impressive with the perfect rate of immediateness: during his performance I dimly recollected Karel Effa’s mastery. But this comic à la Burian is not almost known in Prague (much less in the Czech press)!

As against the last year’s disappointment over The Merry Widow I almost floated in the stage heaven along with him. Now you see what honest piece of artistic work can be done in a year!

The Brno City Theatre selected operetta for the third time after the shift of operetta ensemble under its roof, for the second time with the German director Pavel Fieber as a guest (Cabaret, the Merry Widow). The Bat, popular operetta with a lot of lovely melodies and parts of almost opera dimensions had its premiere on the New Scene on Saturday 29th January. Externally, the performance meets viewer’s expectations of a big variety operetta – it is ablaze of colours, it has a showy stage design (Christian Floeren as a guest), spectacular costumes, though of a rather disunited style (Andrea Kučerová), a good orchestra (conducted by Jiří Petrdlík) and the opera star - Yvetta Tannenbergerová – acting one of the main parts. The whole ball is depicted by Fieber as Falke’s (Bat’s) play plotted against von Eisenstein, which would explain why some actors are bad. But too excessive pathos and hoking also appears in would-be real scenes in the Eisensteins’ flat, especially in the scenes with lady’s maid Adelaide and Rosalinda’s suitor Alfred. On the other hand, excellent Yvetta Tannenbergerová acting the part of Rosalinda (alternating with Magda Vitková) can be put to the credit of The Bat as well as the overpowering boozy performance of Erik Pardus (alternating with Jan Mazák) playing the part of warder Frosch in which the actor mixed his comedic and improvisation talent with nonchalance and added a little bit from Švejk. 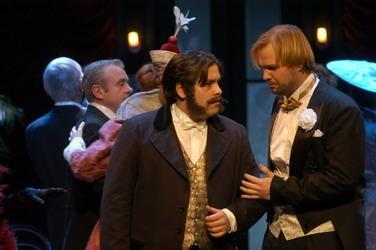 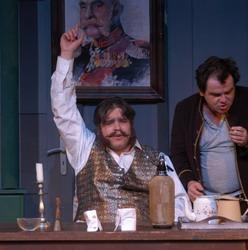 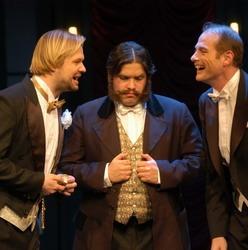 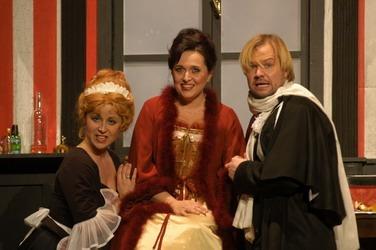 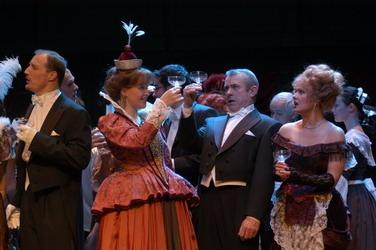 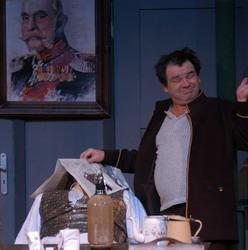 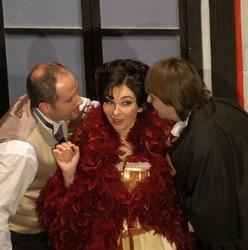 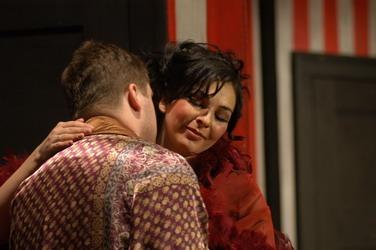 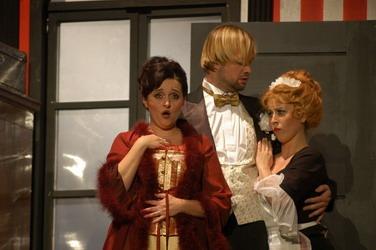 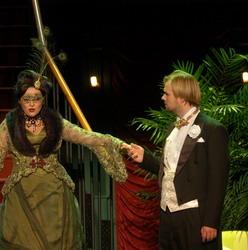 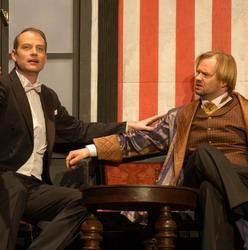 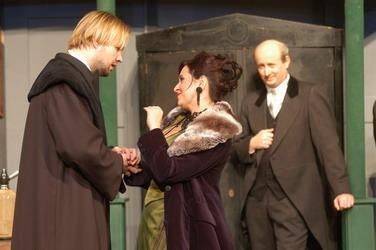